on a set of 7’x5′ index cards, I made a series of postcards about life in Bolivia. Everything here is something I saw, although the details are composite.

Where the tourist market meets the black market, you can find dried llama foetuses, ceremonial carvings and off-brand recreations of any console manufactured since 1980

This is actually a rough approximation of a power pole. it would be an indistict mess of squiggles if every wire what rendered, given the gauge of my pen.

Knife sharpening, while you wait. the “no wearing ties” graffiti is something we actually saw.

El Alto (“the heights”) is technically the satellite city of La Paz, although it’s actually bigger and more populous. For true accuracy, a good rule is to imagine 3 more dogs than I drew to any given picture.

A blue-mohawked sparrow pictured by corrugated tin and a peice of infrastructure that appears to have been stolen from a Japanese city. 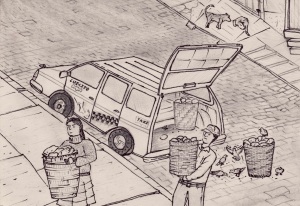 In the mornings you can watch small flocks of pigeons following around the taxis that deliver bread to the stores.

Street accountants in the financial district doing consultations, while a shoeshiner waits for customers.

Crossing lake Titicaca at Tiquina, where they once tried to build a bridge, but the locals that depend on the ferries for income staged a road block that cut off a significant chunk of the country from receiving supplies.

If you’ve got any questions about any weird details in these postcards, I’d love to try and explain them. No promises, though.

Jesse Conlang lives in Edmonton, Alberta, where he has trained squirrels to operate pens and pencils at his whim. You can probably tell that by the quality of the work.
View all posts by Jesse Conlang →
This entry was posted in Bikes, Black Market, Bolivia, Drawing, Postcard Series, Travel and tagged bicycle, bolivia, El Alto, financial district, La Paz, Pigeons, travel, weirdness. Bookmark the permalink.