This review was shockingly hard to put together, and it’s a bit hard to be comprehensive about why. Part of the reason is technology based. I lost my mp3 player (an old iphone I got for free); my laptop slowed down almost beyond functionality, being twelve years old. This eliminated the two standard ways that I’ve listened to music for the past 12 years. I had an office job, and I would listen to Spotify and Bandcamp at work, but that contract ran out in February.

The reason is also financial. At the start of the year I resolved to “go see more live music” I went to a one concert in January (Shannon and the Clams). Unemployment brought austerity to the entertainment budget so seeing Doug Hoyer, Karimah and Baby Grayden was paid for by my girlfriend, and Bardic Form’s show was free (not relevant, but there was a bird there that almost seriously derailed the performance, and frankly they should have charged tickets to watching the flute player continually laugh and have to restart the tune). I even skipped volunteering at the Folk Fest because I was working a short renovation contract and had to keep applying for jobs.

Even still, though, the reason remains only partially articulated. It was a grim year in a lot of ways. I’m not a person who can ignore music; I have no choice in whether or not I’m absorbing it. When I got work in September, it was in a warehouse and I had to listen to mainstream radio, which, after years of retail and restaurant work, made me want to give up on the concept of music. Every day I was exposed to of 100s of songs that I don’t like, but have memorized note-for-note. The Hits of the 80’s, 90’s and Beyond. Classic Rock stations that haven’t changed their playlists since 1990, but have cranked up the conservatism. Edmonton’s Best Rock, somehow not airing a single band from Edmonton*. I genuinely think that mainstream radio made me exhausted with music.

Anyways, you know how this goes by now: in no particular order, these are the top albums that I found in 2019. END_OF_DOCUMENT_TOKEN_TO_BE_REPLACED

This article is late, but, in a sense, everything is hurtling towards obsolescence anyway. Do you feel the passage of time? Does the fourth, non-spatial dimension offer a sensation as you pass through it? In language, we describe time spatially; the year rushes past us, we leave moments behind. But the feel of the passage of time demands more complex metaphors. It is your notion of a permanent self, fraying; it is the transient nature of human experience echoing in old injuries flaring up; it is watercourses shifting thousands of pounds of sediment to forge new paths; it is the decay of a language that was never translated, the last living speaker senile and isolated.

It is your 25 year old co-worker asking if you’ve heard some musician on youtube, and you stare at her blankly because you quickly realize that your last new favourite album came out ten years ago.

Anyways, here’s some stuff I listened to this year.

END_OF_DOCUMENT_TOKEN_TO_BE_REPLACED

The view from Stanley Park 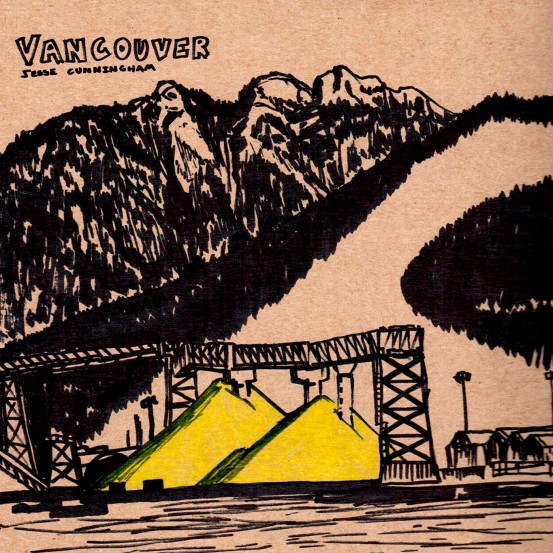 Album art for a song I just released. I really love working in sharpie, on cardboard. I don’t know why. It just feels right.

Also, I learned after completing this piece that all the sulphur is from Alberta, which is very resonant with the song, which is about leaving Alberta for the coast.

What To Do When Your Wallet Is Stolen

Someone broke into my garage, and while I was at the hardware store to get replacement latches and hinges, someone pinched my wallet out of my coat pocket.

After cancelling the cards, ordering replacements, filing a police report and requesting a replacement ID and health care card, I decided to make a new wallet.

END_OF_DOCUMENT_TOKEN_TO_BE_REPLACED

Ok, yeah, I’m a year behind. You know what though? Nobody sent me a single promo disc to review. No press copies, nothing. The most common way that I heard about new music was the randomizer on Youtube, and I only wish I was making that up. How embarrassing for ambitious artists looking for exposure on my extremely well-read blog. As a result, I feel like I really only have enough material to do one real good list anyway. Remember, these are in no particular order. See the Best Of 2015, if you want to know why. I’m sticking to the same premise. END_OF_DOCUMENT_TOKEN_TO_BE_REPLACED

Maybe the most legendary prank in Alberta history. 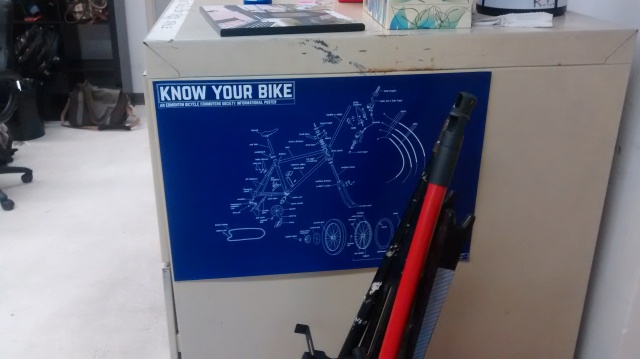 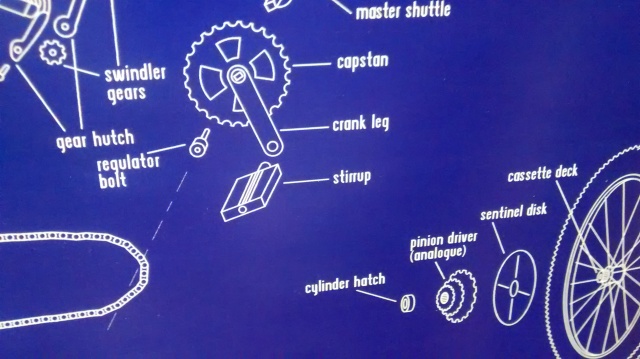 Years ago I designed this poster. Slightly less years ago fantastic human June Mitchell turned it into, like a real-looking poster. Now they are for sale through the Edmonton Bicycle Commuters. 100% factual labels for bike parts. Very useful.

The neighbourhood where I grew up has been a community of German immigrants since the before it was even part of Edmonton, back when the cycling path in Mill Creek Ravine was an active railway, and a local community-minded German would go meet new immigrants at the station to welcome them and show them around. Even during and after the wars, Germans would come, and the Lutheran church still offers German services.

The Canadian veterans in my life, mostly old relatives, carefully avoided talking about war. For me, the most visceral stories came from my neighbours. This should not be taken as entirely accurate, because it’s my own memory of someone else’s memory.

In about 2007 Dad and I were renovating our house, building a concrete foundation for an extension to go on top. Our house was originally built in the late forties by our neighbour Paul, who himself was a boy in Germany during the war, and the grandfather of one of my childhood friends. One day Paul came to inspect our work, as he often did, and say that he wasn’t sure it was going to work out, as he often did (when the extension was completed, he told us it looked beautiful), and he brought with him two other elderly German men. After my Dad and I introduced ourselves and described what we were doing, one of the old fellows spoke up, and he began, without any prompting at all, “people ask us why we let it happen.”

He told us the story of the day that the Nazis marched into his town, and his whole town marched out to meet them. Lines were drawn in the town square and the villagers defiantly jeered and chanted. The SS officer walked out in front of the assembled troops, staring unflinchingly at the crowd and said “Fuck Off.”

The S.S. officer turned and signaled to his men, who uncovered machine guns mounted to the backs of trucks. He stared out into the crowd again and said “Fuck Off.”

The crowd roared, but not as confidently. Small children were sent or carried home, but the villagers held the line and responded in contempt.

The S.S. officer signaled again and the machine guns boomed across the square, over the heads of the villagers.

“what would YOU do? We fucked off.”

This 70-odd year old man, probably no more than a teenager during the war, carried that story around with him every day. At no provocation, he brought himself to tears in front of strangers, for the shameful crime of being afraid of machine guns and not wanting to get shot. What would you have done? I would have fucked off.

When I think about war, I think about my neighbour, in a country that invaded his own, surrounded by immigrants from a country that his country invaded (My neighbourhood is also a historic French community, many of whom came as refugees during or after the war) and the necessity and impossibility of letting go. I think about how few people can be considered winners in a war, and how there are victims and heroes on each side. how the circumstances that lead to tragedy always seem to be intractable. I think about how you can’t blame a person for wanting to forget about war. We remember because it’s our responsibility to the many who will never have the option of forgetting.

There’s this weird thing about music appreciation, where, in our cultural reaction to emotional and subjective pieces of art, we sort music into lists. The 100 best guitar players of all time, best albums of 1975,  top 5 track 1 side ones, greatest accordion album of the century, that sort of thing. Here’s an activity for you: think of a situation, any situation. Break-up, quitting your job, graduation, shopping, sports victory, whatever. Now type “best (situation x) songs” into Google and see what it spits out.

The best thing about these lists is that, by design, every single person who reads one will disagree with it. Obviously, individual writers have unique perspectives, but more importantly, the list is inherently a critically vacuous tool that attempts to describe value not through actual merits but placement relative to other music.

Year-end lists are probably my favourite in this regard. At every step, the list-maker undermines the very premise. The list claims to consider all the music released in a year, but is published in early December, so as to get more hits from Christmas shoppers. Oops, you’re a human experiencing time linearly, you’re not physically capable of listening to all the music produced in a year. Stick to major label releases and other albums that hit a moderate level of success, because a personal connection to music isn’t important unless other people share it. Under no circumstances should the list include an a bestselling album, though. Anyone who listens to more than a few albums will be comparing apples to steak anyway, so the numbering comes out arbitrary.

Posted on September 5, 2016 by Jesse Conlang

Quick, what music do you remember from 2001?

This song broke records that year, and until I started doing research for this article, I had forgotten about it. I find music is harder to forget than it is to remember, but honestly I  Janet’s uncanny smile from the video stuck in my mind more than the song. It’s not a bad song, outside my genre alignment, sure, but a passable pop single that totally ruled 2001. At least, according to its wikipedia page. I would never have guessed. END_OF_DOCUMENT_TOKEN_TO_BE_REPLACED