I’m so famous, small children in China* dress up as me.

it turns out that my wolf mask is popular with more than just furries. This appears to be a performance of the three little pigs, and the wolf design based right off mine. It’s pretty darn adorable. 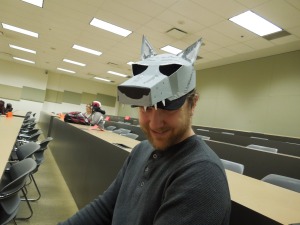 I can’t read a word of this site, I’m afraid, but I am seriously excited about this. it’s completely hilarious to me, and I don’t think I’ve been directly credited on something like this before. hooray! plus, googly eyes!

*I don’t know if this is actually in China, but the writing’s in Chinese, although again I have no idea what kind of Chinese

Jesse Conlang lives in Edmonton, Alberta, where he has trained squirrels to operate pens and pencils at his whim. You can probably tell that by the quality of the work.
View all posts by Jesse Conlang →
This entry was posted in Stuff I made and tagged papercraft, three little pigs, wolf mask. Bookmark the permalink.